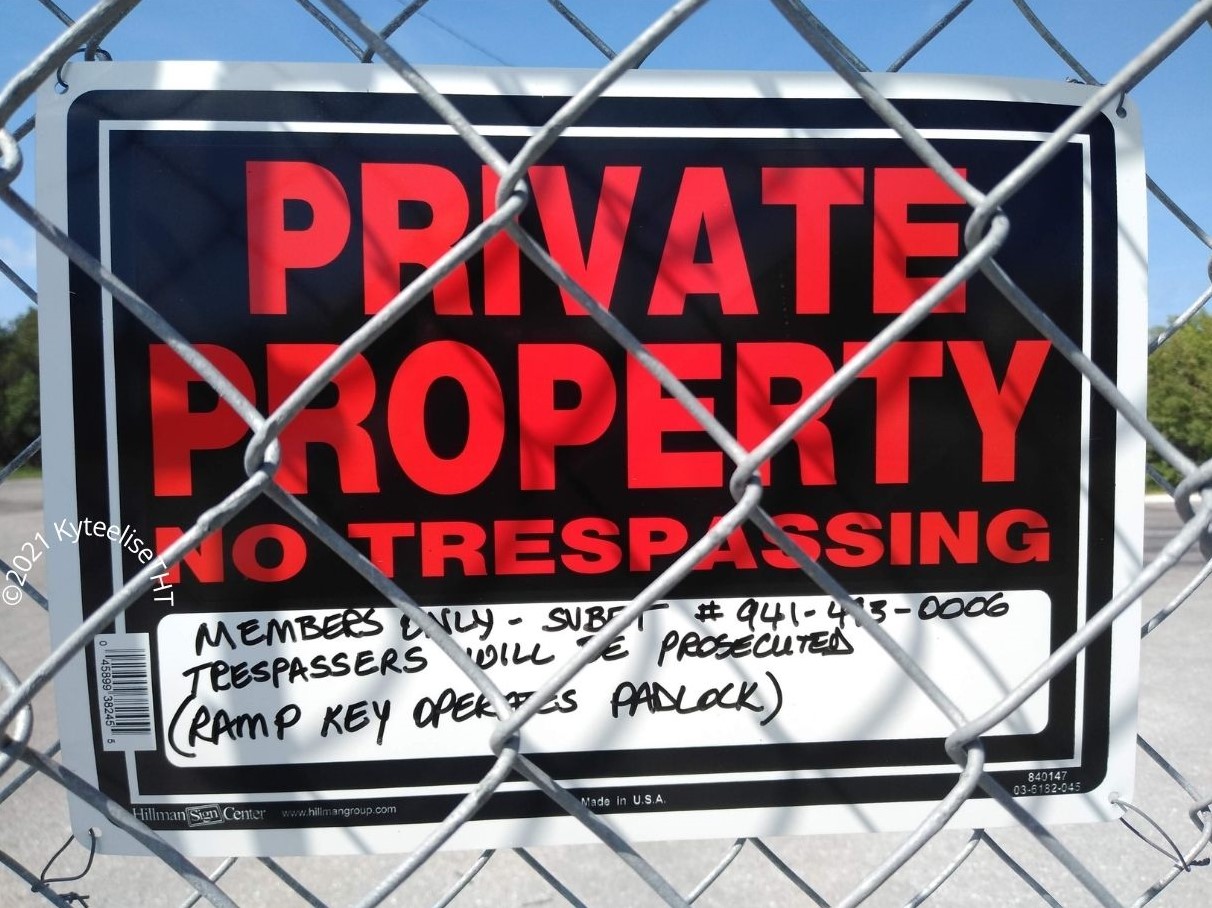 Writer’s Notes: I live close to South Venice Beach and its related properties. And, I have a good deal of personal knowledge about the community and its history. These stories, however, are not the product of my opinions nor are they based on my objectives. I am writing for my community, first, for you, whether or not you live here, and for the sole purpose of giving information. What is made of what is read here will vary.  That is a reasonable diversity of reactions. If these stories inform, educate, or add something new to the reader's understanding, then my work has succeeded. - KyleeliseTHT

THE PROMISE OF A FOREVER BEACH

Warren Smadbeck and his brother, Arthur Smadbeck, two years his junior, planned a waterfront “family” weekend getaway community called Fire Island Pines in Suffolk County, New York. The brothers, who owned The Home Guardian Company of New York, purchased the property in 1924 but didn’t develop the land on the southern coastline of the Long Island Sound until the ‘50s.

Dr. Warren Smadbeck was a trained dentist who earned his degree at the age of 19. After his father, Jacob Louis Smadbeck, died in 1911, the elder son stepped in to run the family real estate business, primarily selling land in Westchester and Suffolk counties. Arthur left high school to work alongside. Upon his death in 1977, he is described in his New York Times obituary as “a pioneer in the development of rural and suburban real estate and president of the New York Coliseum.“

The Putnam County Courier obituary announcing Dr. Smadbeck’s death coined him as a “ pioneer in suburban real estate development and who developed Lake Carmel, Putnam Lake, and Roaring Brook, all in Putnam county.”

The Smadbeck brothers developed thirty subdivisions across the country, which earned them the distinction of being dubbed “the Henry Fords of the industry” of suburban development.

South Venice, Florida, is one such housing tract created by the brothers. 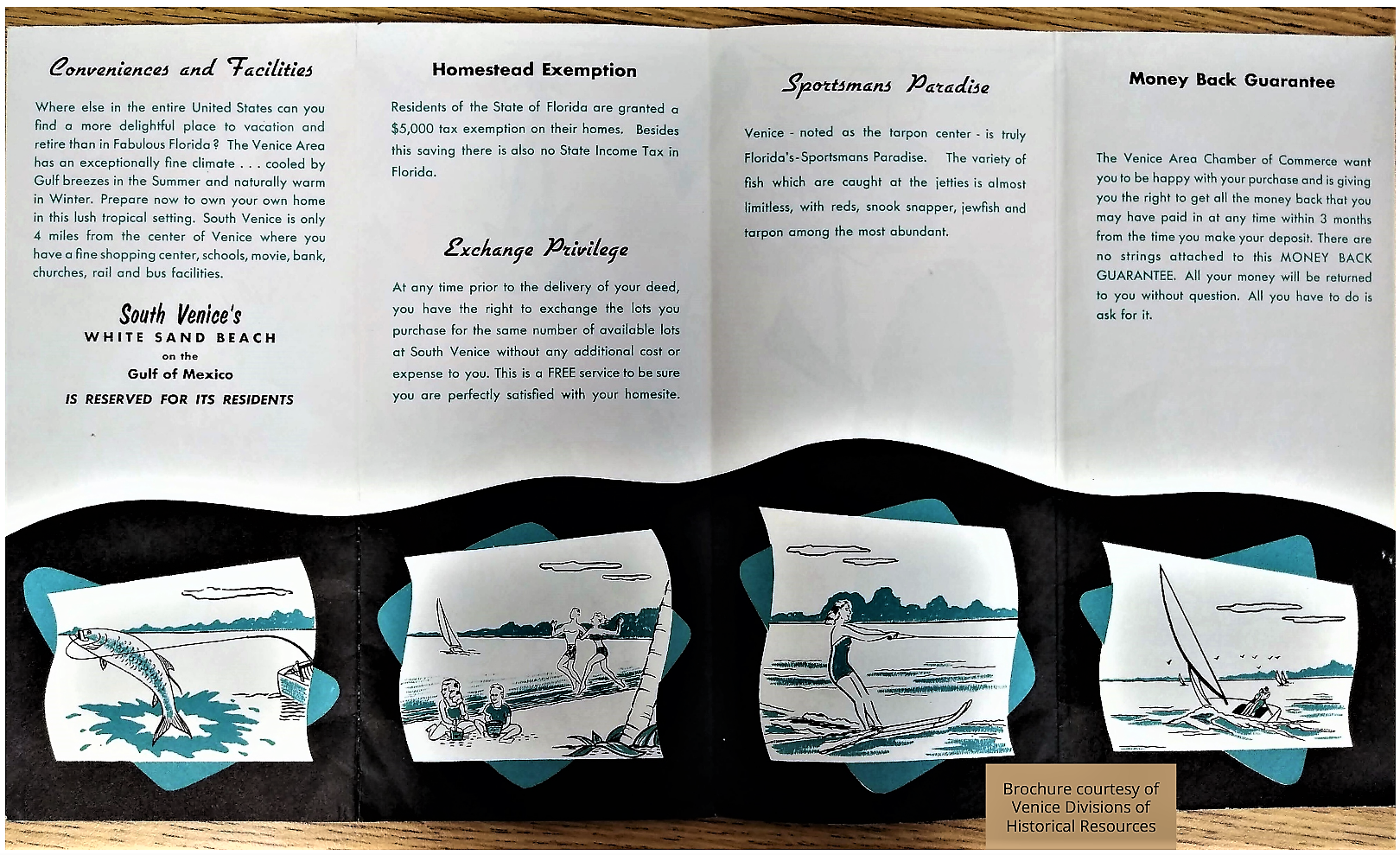 A decade before the Smadbecks began work on Fire Island, on June 9, 1941, they formed W&A Construction Corporation, which developed South Venice.

On December 22, 1952, Anna Weber, listed as president of W&A Construction Company, and Evelyn Bleyer, the secretary, registered a plat with two hundred sixty-eight 40- times 100-foot lots, some slightly larger, in South Venice. The company platted seventy-four more areas into a total of 19,587 slices from three thousand acres of land and sold them for about $600 apiece. It would take two lots on which to build a modest home.

W&A Construction Corporation registered its final addition, Unit 75, on May 7, 1954.

In a unique measure for early suburban planning, the Smadbecks’ added a park to every neighborhood of its South Venice subdivision - 37 parks in total. Challenger, Nightingale, and the Lake with open green space behind the former Bill Bucks Chevrolet dealership on U.S. 41 are examples of the developers’ recreational areas built into the planning and donated to the community.

Known for building around lakes and open communal spaces, all of the Smadbeck developments include donations of land for these purposes.

Referring to the seventy-five subdivided units of South Venice, a 2003 Sarasota County staff report states, “These plats established the 37 park areas (Parks) that are currently located throughout the Subdivision and dedicated these Parks for public use.”

The memorandum also outlines why South Venice Civic Association would deed all but one of these parks to Sarasota County.

When lot sales and development boomed in 1950s South Venice, the area lacked the local representation to manage its shared amenities.

At the same time, residents yearned for continuity and organized social engagement.

On November 12, 1955, a group assembled at the beachfront Sunset Motel for a “Meeting of S. V. residents interested in forming a civic association…”. They became the South Venice Civic Association (SVCA) on December 23, 1955, and elected its first permanent leadership on January 17, 1956.

Soon after that, the newly-formed social group would fill the other void in South Venice - representation.

What came next is a defining moment in history. The members of SVCA became the representative body of South Venice.

Between 1954 and 1957, the Smadbecks donated the common areas to the residents of South Venice as part of an extensive portfolio of land gifts, then, eventually, granted the deeds to SVCA.

On May 2, 1954 - one year and six months before SVCA existed and three years before W&A Construction Corporation transferred to it all the communal deeds - the Smadbecks dedicated the beach frontage and footbridges to the residents of South Venice. The Mayor of the City of Venice, Sarasota County and government officials, and eighty-five residents attended. 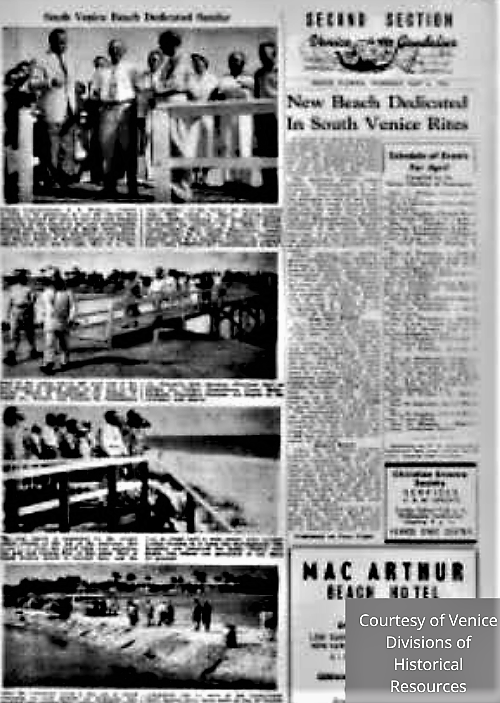 “The beaches are reserved for South Venice residents, but others are permitted to use them at present,” reported the Venice Gondolier newspaper about the dedication event.

“Reserved for South Venice residents” or “private.”  Some variation denoting the community’s interest in the common areas within the subdivision was commonplace.

Over the years, the SCVA has exercised considerable, sometimes unilateral, authority over the beach and other recreational properties gifted to the residents during the early days of South Venice.

In 2001, SVCA created the South Venice Beach Endowment Trust (SVBET) to manage the beach, its inland waterway, and the property gateway, which houses the ferry boat, motorboat ramp, kayak launch, parking lot, fishing, and pedestrian areas, and a small lot next to the SVCA community center.

ABOUT THOSE THIRTY-SEVEN PARKS

In the memorandum that states the intended use and to whose benefit the Smadbecks donated the common areas of South Venice, the report outlines why SVCA later gave thirty-six of the community’s 37 parks to Sarasota County.

“In February 2001, staff was approached by the SVCA for information regarding the responsibility of the County for maintenance of the Parks,” the report states. Adding, “...the maintenance issue, as well as that of ownership, had been a source of controversy for at least 20 years, and that the situation had yet to be clearly resolved.”

The deeded parcels transferred to SVCA were the green spaces the developers had also set aside for the residents of South Venice.

In August, the “newly-formed” South Venice Resident Coalition (SVRC) weighed in on the parks maintenance issue and supported the transfer of thirty-six of the 37 to the County.

In Resolution 2003-057, Sarasota County assumed ownership of the 36 recreational and conservation spaces, including Challenger and Nightingale Parks, and a lake and open space. The County officially registered the deal on March 12, 2003.

SVCA and SVBET retained ownership of the remaining land-locked green space, the beachfront, the community center property, and the 4800 Lemon Bay Drive gateway to the beach.

When SVBET installed the fence at 4800 Lemon Bay Drive, a “Members Only” notice was posted, along with ”No Trespassing” and “Private Property” signage.

At a May 19, 2021 SVBET general meeting, this writer asked the trustees to define “members.”

She also answered the follow-up question: “Are there members who have unrestricted access to the park when you begin to lock it?” Earlier, Trustee (Charles) Chuck Bauman said, "We haven’t, as the trust, started locking the gate, but the boaters have. And, the captains have not."

“The people who have a key," Ms. Cooper said. Then she clarified with, “...only the boat ramp key holders.” Adding, “And, that is only to accommodate the people who fish - some of them for a living, and some of them at night."

“But that’s for a specified purpose. It’s not unrestricted access,” Mr. Bauman said.

So what about Kayakers who go out to watch the sunrise?

When a resident kayaker said, “This seems like it’s been segregated as a separate issue - the kayakers.”

“The kayakers do not pay. And, neither does anyone that wants to just go walk around over there. So, the only people that have access - some people take their dogs to run around, play ball or whatever in the grass, which is all fine, well and good -  but none of those people pay to use any part of the (ferry property). So, if a kayaker buys a ramp key, then they would have access to the gate,” Ms. Cooper said.

Kayakers can launch their kayaks into the Intracoastal from a designated area when the park is open.

Trustee (Sandra) Sandy McHenry mentioned an email from the West Coast Inland Navigation District (WCIND) that needed follow-up from the board. The trust members gave no further details at the meeting.

Ms. Cooper deferred the matter to be taken up at an executive session after the general meeting concluded.

WCIND is a waterways management agency that has provided funding to the South Venice ferry and beach properties and its inland waterway. Sarasota County administered the grants.

Insofar as to whether WCIND money can fund private property improvements, Mr. McBride said, “It depends on the project - the underlined ownership isn’t as important as the access.”

The access to the improvement must be public to qualify for WCIND funding, not the ownership.

Ms. Cooper’s claim that all the residents of South Venice Beach are members of the ferry property doesn’t fully encompass the “public” that SVBET has indicated would benefit from some of the funding that supports its facilities.

In 2013, SVBET received $7,500 “in support of the acquisition of a ferry that will be available for use to the general public for a fee;.”

WHAT’S NEXT FOR THE SOUTH VENICE FERRY PARK?

The park is now open from 8 am until a half-hour after sunset or whenever a motorboater unlocks or locks the gate.

Nearly fifty-three percent of the parks in Sarasota County close at sunset.

If Mr. Bauman has his way, the South Venice ferry property - with its 6-foot, gated fence, as wide as the open green space - will soon be the most fortified park in the area.

He said at the May 19 meeting that he'd already spoken with one vendor about more heightened security.

Floodlights, license plate readers, and face-recognition cameras, with a range from inland to the beach. The lock across the boat ramp. The caged ferry house and proposed shuttering from the waterway side when it’s not in use,  The unevenness of who gets to use the space and when.

The South Venice ferry property might well end up having that “prison” look and feel about which John Bridinger worried. He’d suggested a more attractive closing off of the property after hours.

Mr. Bridinger, 39, was the youngest Trustee. He resigned at the end of the May 19 meeting.

i want a website like this
Ucraft is committed to preventing phishing, malware and other types of fraud. In case of noticing any actions that violate applicable laws, regulations or third-party rights, please file your report here.
Ucraft is a free website builder that provides web designers, marketers and business owners with a set of web design tools to start their next awesome project in minutes. No coding or designer skills needed. Go to Ucraft